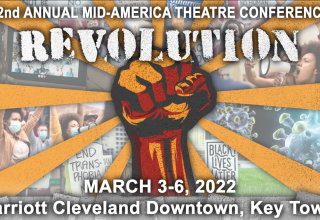 MATC is dedicated to the growth and improvement of all forms of theatre throughout a twelve-state region that includes the states of Illinois, Iowa, Indiana, Kansas, Michigan, Minnesota, Missouri, Nebraska, North Dakota, Ohio, South Dakota and Wisconsin. This conference, themed around the idea of “Revolution,” was the first in-person meeting of the organization since 2020—and served as an opportunity for theatre-makers and scholars to reflect on the revolutionary ways that the practices of making and teaching theatre have changed during the past two years.

At the conference, Antone, an assistant teaching professor of theatre, presented in the Practice/Production symposium about revolutionary ways to reconsider current funding and producing models in contemporary theatre. Her findings are part of a larger work entitled “The Empty Triangle,” will be featured in “Critical Approaches to Arts Administration in the New Millennium,” to be published by McFarland & Company.

Murphy, an assistant professor of theatre, presented in both the Pedagogy and Practice/Production symposia—reflecting on revolutionizing the curriculum of the musical theatre history course he teaches at Iowa State, as well as the process of workshopping the new musical “BABA”, written by Jessica Kahkoska and Elliah Heifetz, which will be presented April 7-10 in Fisher Theater as part of ISU Theatre’s 2021-2022 season.

The 2022 conference also marked the completion of Murphy’s two-year term as a co-chair of the Practice/Production Symposium for the conference, during which he served as an inaugural member of both the Conference Planning Committee and a By-Laws Committee aimed at revising MATC’s governing documents. He will now serve the organization as a member of the Nominations and Appointments Committee prior to the 2023 conference in Minneapolis.