Carnegie Corporation of New York announced today that Amy Erica Smith, LAS Dean’s Professor and associate professor of political science, has been selected as a 2020 Andrew Carnegie Fellow. Smith is one of only 27 researchers nationwide, and the first at Iowa State who will receive $200,000 in philanthropic support for the award, in recognition of high-caliber scholarly research in the humanities and social sciences that addresses important and enduring issues confronting our society.

Smith will utilize the award to pursue research projects exploring how religion is molding citizens’ explanations of and response to climate change. The work will culminate in multiple journal articles, a book manuscript and contributions to a documentary film project. Her current work demonstrates how informal networks, religious organizations, and religious beliefs inform and mobilize people in both democratic and authoritarian regimes.

“We are very excited to see Professor Smith recognized with this prestigious fellowship,” said Beate Schmittmann, dean of the College of Liberal Arts and Sciences. “Her work on religion and Brazilian politics has garnered her national visibility, and this fellowship will enhance her scholarly stature even further.”

Following an extensive history of published works, her most recent book, “Religion and Brazilian Democracy: Mobilizing the People of God,” examines how politics and religion intermingle to either undermine or capitalize on each other, as fits the need of a political or religious leader. She also contributes to nationally recognized media outlets such as the New York Times, Inside Higher Education, the Washington Post and Vox.

This year’s fellowships were selected from 322 nominations and the class is made up of 15 women and 12 men. 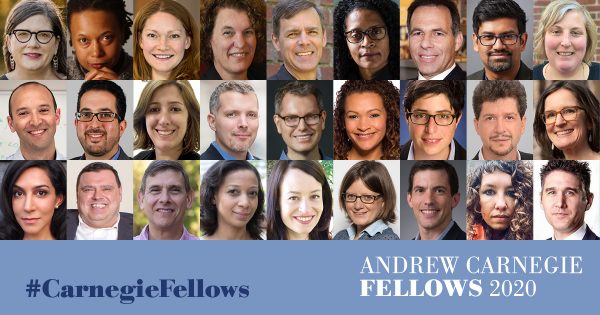 “The pursuit of knowledge and the generation of ideas were critically important to the Corporation’s founder, Andrew Carnegie, whose mission is especially relevant today as our society confronts problems that have been greatly exacerbated by COVID-19,” said Vartan Gregorian, president of Carnegie Corporation of New York and president emeritus of Brown University. “Fellows from earlier classes are actively addressing the coronavirus through their research on topics such as its impact on rural America, government authority during a pandemic, and ways in which different countries address infectious diseases. The work of this exemplary Class of 2020 will also be of service across a range of other crucial issues.”

She has received fellowships and grants from the National Science Foundation, the American Council of Learned Societies, Fulbright, and the University of Notre Dame Kellogg Institute for International Studies, as well as the Luce, Mellon, and Templeton Foundations. In September 2016, she was recognized with the Award for Early Achievement in Research from the College of Liberal Arts and Sciences at Iowa State.