Mock trial jury returns verdict of “Guilty” – with a twist

News from the Department of Geological and Atmospheric Sciences:

The 17th annual “A Civil Action” mock trial on December 5, 2019 produced an overwhelming 14-5 jury verdict of “Guilty,” making it two guilty verdicts in a row for the plaintiffs’ team.

“In this year’s trial, the use of a scale model showing the contaminant plume reaching Wells G and H helped the plaintiffs’ team convince the jury of 19 Geology 100 students that the defendants were guilty (liable), and $12 million was awarded to the plaintiffs. The defendants highlighted the long history of industrial activity and use of trichloroethylene (TCE) by other parties in the watershed, but to no avail,” said Dr. Bill Simpkins, the hydrogeology professor in the Department of Geological and Atmospheric Sciences, who manages the annual “A Civil Action” mock trial. “Hydrogeology experts for both sides, Dr.Gina Pinder (Theresa Halligan) and Dr. Wellium Goodwater (Joseph Kirkpatrick)” were very good, but the jury seemed most swayed by the emotional opening testimony of Anne Anderson (Tiana Nichelson), mother of Jimmy – one of the children who died,” Simpkins said. 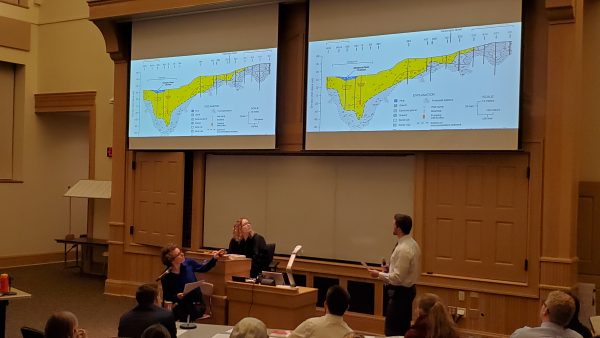 Since 2002, Simpkins’ senior/graduate level hydrogeology class has presented a mock trial built on the 1986 tort case that later became “A Civil Action,” a Pulitzer Prize-winning non-fiction book and motion picture. In the real trial, parents of eight Woburn, Massachusetts children sued three companies – Beatrice, W.R. Grace, and Unifirst – for contaminating groundwater with trichloroethylene (TCE) – the same water that supplied drinking water to the town. The TCE was suspected to have caused leukemia in eight children and resulted in their deaths. For the hydrogeology class, plaintiff and defendant teams are chosen and try the case in front of a jury using the facts presented at the original trial. In the actual case, the parties settled out of court for $8 million before the case went to the jury.

This year’s version of the mock trial began with a new twist. In the afternoon preceding the trial, attorneys representing the plaintiffs’ and defendants’ teams approached Simpkins and proposed a trial settlement. It stipulated that the defendants would pay the plaintiffs a sum of $10 million, which would be distributed as follows: 40% to the attorneys, 46% to the affected parties, and 14% for environmental cleanup of the TCE contamination. It also stipulated that each family would receive $287,500 now and an additional $287,500 after five years. The decision was left to Judge Anna-Turi Maher and, when the trial began that evening, both parties approached the bench and presented the settlement offer to her. She dismissed it on the grounds that it was not properly notarized by the famous hydraulic engineer, Henry Darcy (who died in 1858), and therefore was invalid. Interestingly, the defendants would have saved $2 million outright and considerably more in medical expenses for the residents had the settlement been accepted. 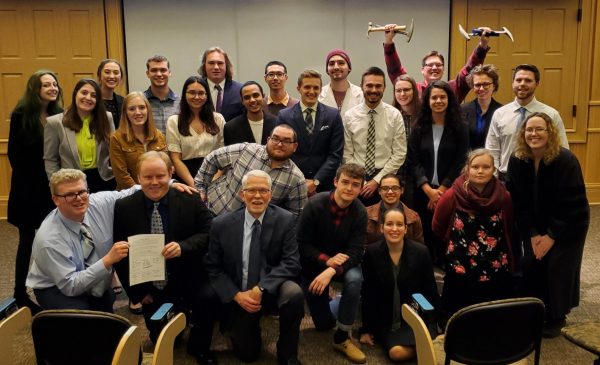 The mock trial exercise addresses the course learning objectives by encouraging verbal elucidation of the fundamental principles of groundwater flow, velocity, and travel time as well as well hydraulics and groundwater-stream interaction. This year’s 24 students assumed the roles of attorneys and expert witnesses, including historians, geologists, engineers, and hydrogeologists. In addition to fulfilling the learning objectives, the mock trial is a great learning experience, an excellent group project, and a successful capstone for the course. A few universities do similar reenactments, but Simpkins’ version is the only one that is implemented in a senior/graduate-level course. In the 19 total mock trials that have occurred at ISU, the plaintiffs lead 12.5 to 6.5 (2014 yielded a hung jury).