“Think of it as a mash-up of ‘Hamilton,’ ‘Bill and Ted’s Excellent Adventure’ and ‘Night at the Museum,’” said Brad Dell, director of ISU Theatre and the production’s director. “This musical shares an inspiring message with a side of utter silliness.”

Based on the children’s book “Chasing George Washington,” the musical opens with a group of diverse students on a White House field trip. When they bump into George Washington’s portrait, America’s most famous founding father falls out of his frame. He then takes the students on a wild-paced trip back through time to discover who belongs in the real portrait of America.

“The musical is about finding out if you belong here,” Dell said. “It’s about discovering, celebrating and embracing the beautiful diversity of America in places it hasn’t always been recognized. It puts a spotlight on the power of the individual, and particularly young people, to make a difference.” 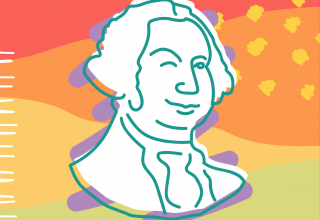 “In this show, you can expect to meet figures such as President Abraham Lincoln and first lady Jackie Kennedy Onassis,” Dell said. “This will be great entertainment for your whole family, especially those with students in elementary school, middle school or high school.”

“Chasing George Washington: A White House Adventure” is part of ISU Theatre’s 2019-20 “HERoic” season, featuring plays and musicals written by women. A full list of events is available at theatre.iastate.edu.

ISU Theatre will present a panel discussion, “All Created Equal: Teaching Equity, Diversity and Inclusion” on Sunday, Oct. 27, at 2:30 p.m. in the Scheman Building, Room 004. Community members are invited to engage with scholars and educators on issues of youth and diversity.

This event is co-sponsored by ISU’s Women’s and Gender Studies Program and the Center for Excellence in the Arts and Humanities.

Tickets ($20 for adults, $18 for seniors, $10 for students and $5 for youth 17 and under) are available through the Stephens Auditorium ticket office, Ticketmaster or the Fisher Theater box office prior to performances.

Individuals with disabilities are encouraged to participate in all ISU Theatre events. If you require a reasonable accommodation to do so, please contact ISU Theatre at least one week prior to the event.

As a part of the Iowa State University Department of Music and Theatre, ISU Theatre seeks to empower citizen artistry by engaging students and the community in transformative theatre and performing arts experiences which examine the human condition, encourage lifelong learning, teach artistic skills, prepare professionals, inspire empathy, explore creativity, build relationships and embrace diversity. ISU Theatre administers a major and minor in performing arts and produces multiple theatre and performing arts productions throughout the year featuring performers, designers and technicians from throughout the university.