When The New York Times called David Peterson, a professor of political science, to ask what was happening in Iowa pre-caucuses for political ad campaigns, he knew the answer lay in the increased campaigning online.

More and more, viewers are using the internet, rather than traditional media for entertainment.

To match this shift in viewing trends, political campaigns are targeting online audiences. And with the use of online advertising comes a whole new way to track and target the viewer. Data gathered about viewers online really is extensive, but how effective are current attempts at micro-targeting?

“Campaign advertisers make really strong claims about their abilities to identify incredible amounts of information about individual voters,” Peterson said, “And that they’re able to carefully craft and tailor messages for them. We have no idea how true that is in the online advertising world.”

But he intends to find out.

Peterson’s challenge was to find a way to catalogue the ads that viewers saw. With traditional media, ads were viewed and coded manually. Mail advertisements were gathered and sent to researchers and TV stations were monitored. But tracking and measuring individual ads targeted to different users online is significantly more challenging.

So, he brought in some help from computer scientists.

Wallapak Tavanapong, a professor of computer science, had just the analysis expertise he needed and was interested in finding new collaborations.

“I have worked with medical doctors before and I wanted something totally different and to see computer science in different areas,” said Tavanapong. “In medical research I do a lot on image and video processing so the image and the video part come in to play here.”

“If you can capture it I can automatically analyze it,” Tavanapong said.

All that was left was to capture the ads. To do that, Adisak Sukul, a lecturer in computer science, created 70 bots, each with a different profile of characteristics: age, gender, location and interests. The bots watch YouTube and capture data from what ads are shown to them.

“You can view the bots as a search engine for the ad,” Sukul said.

An additional benefit of the research is its potential to do real-time analysis of ad campaigns. While old methods were analyzing ads from campaigns four years prior, this new method holds the promise of analyzing advertising campaigns as they happen. 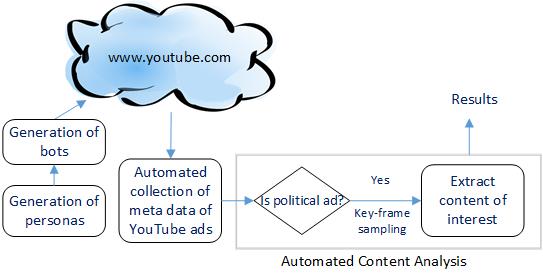 “Part of our goal is to be able to do this in real time so that by 2020 we can be relaying exactly what’s going on in these online strategies as they’re happening,” Peterson said. “We’re going to have the best data for trying to uncover exactly what’s going on in these campaign strategies which, at least currently, is a tremendous concern.”
Loading...