The power of portraits

"Why are the portraits on the wall almost all men?"

Last fall Javier Vela, associate professor of chemistry, was preparing for a lecture in the Gilman Hall 1352 seminar room when a female graduate student asked him a simple question.

"I told her, ‘Unfortunately, those portraits were hung decades ago by long retired or deceased faculty,’" Vela said, "while at the same time feeling guilty about not having done anything about it."

Vela wasn’t responsible for the room or its artwork. Yet as the newly appointed Equity Advisor for the College of Liberal Arts and Sciences, he felt compelled to initiate a response.

Each week the Gilman 1352 seminar room hosts 3,542 students for classes ranging from chemistry to architecture to naval science. Thanks to the efforts of Vela and others, its walls now also host a newly diverse representation of distinguished scientists.

The 14 portraits displayed include Hispanic, African American and Asian scientists; scientists from four major religions; a scientist who identifies as LGBT and one scientist with a disability. Half of those featured are women. A few portraits, such as those of George Washington Carver and Marie Curie, were retained from the original display.

"The idea for this project is to help everyone feel connected and inspired," Vela said. "Not just one demographic, but everyone. We hope these types of displays will become a new normal that will, consciously and subconsciously, positively impact the lives and career choices of many students, faculty and staff at Iowa State." 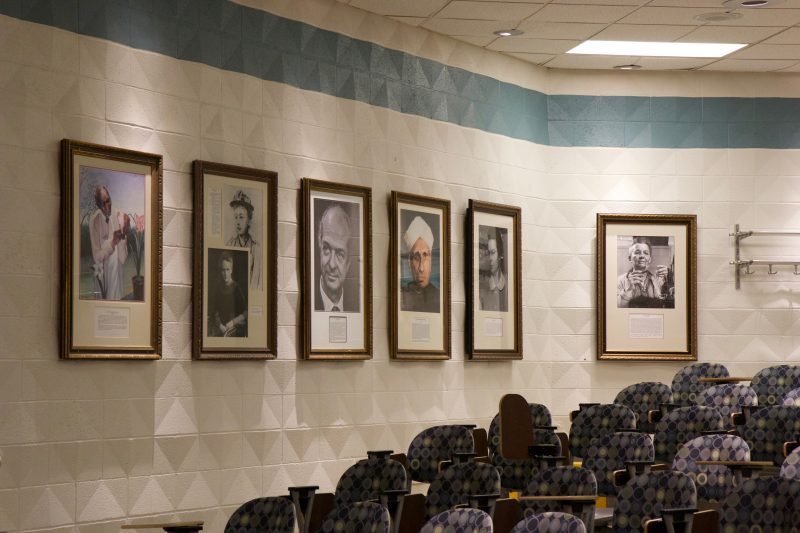 Vela polled dozens of female and underrepresented chemistry faculty members and graduate students to gather nominations of prominent women scientists to include, and Renee Harris, administrative specialist in the chemistry department, led the logistics of updating the physical space.

Harris was familiar with the previous portraits. In 1975, she had a freshman chemistry class in the room and remembers a wall of "menacing, stern old men." Clearly, she thought at the time, "only men did chemistry."

Harris estimates many of the original portraits had been on display since the 1960s.

"Many of the portraits were ancient," she said. "We actually tried to start this project fifteen years ago, but it stopped because the technology available then made it difficult to get high-resolution images for large portraits."

Among those now featured are Rosalind Franklin, whose X-ray diffraction images led to the discovery of the double helix of DNA; Nobel Prize winner Youyou Tu, a Chinese scientist whose discovery of chemical compounds for treating malaria is credited with helping save millions of lives; and American nuclear chemist and Iowa State alumna Darleane Hoffmann (B.S. chemistry ’48 and Ph.D. chemistry ’51) who confirmed the existence of element 106, Seaborgium.

For others seeking to update similar art displays, Vela and Harris offer this guidance: be patient, flexible and willing to compromise.

Budgets that include dedicated resources for promoting diversity and inclusion are key, Vela noted. The project received financial and administrative support from the College of Liberal Arts and Sciences and chemistry department.

"I want to believe the room is much more welcoming now," Vela said. "Certainly people who have been here a year know what it was and what it is now, and I feel like they notice that we’re trying. We’re trying to be more inclusive.”

In addition to Franklin, Hoffmann and Tu, the scientists of Gilman 1352 now include: