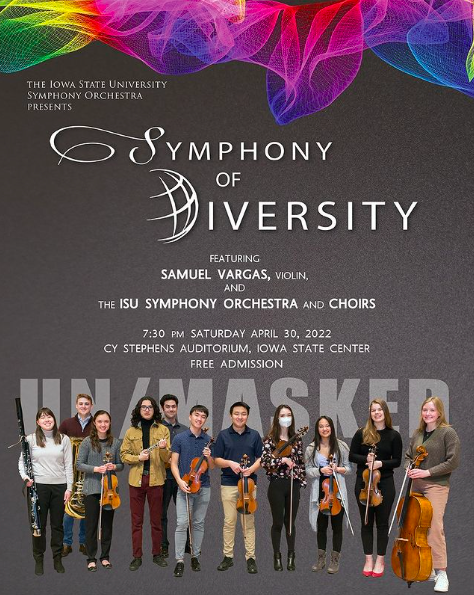 Enjoy an evening of music performed by the ISU choirs and ISU Symphony Orchestra together in a joint performance on Saturday, April 30, at 7:30 p.m. in Stephens Auditorium. This concert, themed “Diversity Un/masked,” will celebrate identity, highlighting unusual works by composers of diverse backgrounds. This concert is free and open to the public.

Jonathan Govias, director of orchestral activities, brought a concept called “Symphony of Diversity” with him to Iowa State from a previous position. Now in its seventh iteration, this is the first time it has included a choral element.

Program highlights will include “Baba Yetu” by Christopher Tin, which is a setting of “The Lord’s Prayer” in Swahili and the first video game theme song to earn a Grammy Award. Recorded by South Africa’s Soweto Singers as the theme music for the video game “Civilization IV,” the song helped elevate the public perception and prestige of video game music, said Govias.

“For Christopher Tin, who is American born with parents from Hong Kong, to write in a western medium but use Swahili is a perfect example of how identity is something we claim, not something that is forced upon us,” Govias said. “This concert will feature unique cultural heritages and modes of expression through the common platform of the orchestra.”

The orchestra will also perform “Violin Concerto No. 2,” a major concerto by Florence Price, the first Black woman whose music was performed by a major American symphony. The performance will feature internationally renowned soloist Samuel Vargas. This masterwork by Price, who died in 1953, was rediscovered with a treasure trove of her other manuscripts in 2009.

Another orchestra piece will be “Ananderi Sagar Hote” by Rabindranath Tagore in an orchestration by Govias.

“Tagore is considered one of the great world poets, on par with Goethe and Shakespeare,” Govias said. “He wrote in both Bengali and immaculate English, so he could speak to audiences both from his own culture and internationally with his poetry and music. This piece will be the most challenging work on the program for the orchestra, as it demands a completely different style of playing over a highly sophisticated, asymmetric rhythmic base.”

“This is especially exciting because I am Mexican and it is rare to get to play pieces written by someone of your heritage,” Auwerda said. “My peers and I love playing this piece. It’s hard not to dance in my seat while we practice. Additionally, I am ecstatic to meet Samuel Vargas, a Venezuelan violinist who recently won the Sphinx competition.”

Along with singing “Baba Yetu,” the combined choirs’ main performance will feature “Illuminare,” a new five-movement work by Des Moines composer Elaine Hagenberg. This piece was commissioned by a national consortium of eight choirs, including the Des Moines Choral Society. Using sacred Latin texts, “Illuminare” invites listeners on a journey that moves from darkness and confusion to hope and peace.

“Our students will have the opportunity to meet Elaine on campus and gain insights into the ‘why and how’ of her writing,” said James Rodde, director of choral activities and the Louise Moen Hamilton Endowed Chair in Music. “Over the past decade, Elaine has become a prominent name in the choral world, and her music has touched thousands of singers.”

The combined choirs will also perform the world premiere of “Downfall,” which is an a cappella work and the final movement of a new composition, “Renaming the Rain,” by noted Latvian composer Eriks Esenvalds. The piece, scored for three choirs, features the poetry of Oregon Poet Laureate Paulann Petersen.

Sophia Pike, senior in music and vice president of the Iowa State Singers, said she especially enjoys bringing the vocal and instrumental worlds together.

It’s also a chance for Iowa State music students to reconnect in their first concert featuring the combined choirs and orchestra since the pandemic.

“All of us are looking forward to performing in such a large ensemble,” said Karlee Nelson, sophomore in music. “Being able to musically connect with hundreds of other students and then share the result with an audience is such a beautiful thing, and it means more now than it did in the past because of the pandemic. After living in the pandemic, we’ve come to understand how powerful music can be, and because of that, we want to share the gift of music with as many people as we can.”

For more information, visit music.iastate.edu. The Symphony of Diversity is co-sponsored by the Department of Music and Theatre; Office of Diversity and Inclusion; College of Liberal Arts and Sciences; Student Affairs; Ivy College of Business; Parks Library; and Committee on Lectures (funded by Student Government).