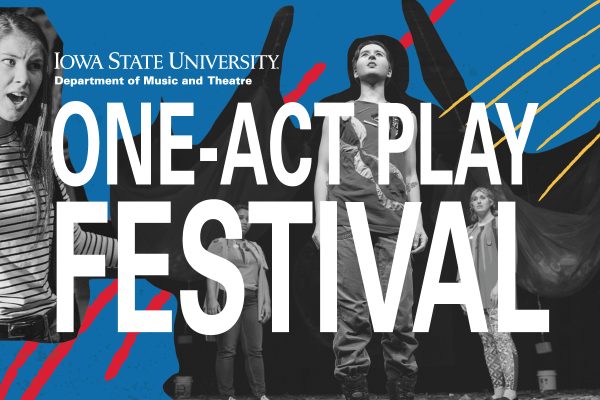 Expect an innovative and bold range of storytelling at ISU Theatre’s One-Act Play Festival, opening March 3 in Fisher Theater at 7:30 p.m. The nine plays in the festival include stories of a lovestruck alien, first dates, issues of race and policing, assassins and vampires, pigeons in wartime and more.

It’s the first time this student-produced festival will star in ISU Theatre’s regular season. Students from Iowa State’s advanced directing classes select, cast and direct the one-act plays, while student designers—some of whom are leading design for the first time—design all the sets, costumes and lighting.

A rotating selection of the plays will be performed each day of the festival, which runs from March 3-6, including two plays penned by performing arts senior Grant Tetmeyer.

“We’re thrilled to bring these fresh perspectives and innovative talents to the Fisher Theater stage,” said Brad Dell, chair of the Department of Music and Theatre. “I’m so excited for our students to share not only their amazing performances but to lead all creative aspects of the directing and design. Audiences are going to have fun.”

Kathryn Ripley, a senior in performing arts, is directing “Cuckoo Clock,” a comedy about a first date gone wrong at a German restaurant.

“I read through so many one-acts, looking for the right one,” she said. “As soon as I read ‘Cuckoo Clock,’ I knew that I had to direct it. It made me laugh so much, and I pictured myself having a ton of fun working on it and seeing it come to life.”

As the director, Ripley is gaining new experience in creative collaboration.

“There are so many people that are working to get this play on its feet, and they bring so much to the table,” she said. “The actors are so talented and funny, and they play the characters perfectly. With the collaboration from the actors, designers and stage management, I’m so excited to see our finished product. I hope audiences feel joy. It’s such a funny play, and I hope they laugh as much as we do during our rehearsals.”

“I chose this play for a plethora of reasons,” Booker said. “I loved all the aspects and topics this play touches on, such as police brutality, interracial relationships, prison reform and traveling internationally as a Black person, to name the key ones. I will be challenged to tackle some of these topics with my cast in such a short time. I want them to understand the history, understand what they are saying and representing when they are onstage, and make sure the facts are correct and everyone is being represented accordingly.”

For several of the student designers, this is their first time designing the lighting for a large-scale project in Fisher Theater.

“It’ll be a learning curve that I’m incredibly excited for,” said Bobbie Buie, performing arts sophomore and lighting designer for multiple plays. “Each show that I’m designing exists in a setting that is incredibly rich and different from our world, so I’m looking forward to crafting these interesting environments through lighting. I’m aiming for my design, along with scenic and costume design, to truly immerse the audience into these settings.”

Samuel Huhn, a junior in performing arts, said lighting design is an exciting opportunity for him to experiment with a new field of the arts.

“I hope to widen my skill set and show appreciation towards all the areas of a play,” Huhn said. “My two plays are both in and out of reality. You don’t know where the script stops and reality starts. Distorting the traditional sense of the play is a task I am excited to design for!”

“It is exciting to see student directors, actors and designers get a better focus in the season,” he added. “This is another step towards the professional world of the arts.”

Performances will be held March 3, 4 and 5 at 7:30 p.m. and March 6 at 2:00 p.m. at Fisher Theater in Ames. Each night will feature a rotation of different festival selections, and the schedule is available at the ISU Theatre website.

All seating is general admission. Tickets ($20 for adults and free for Iowa State students and youth) can be purchased at the door, through the Iowa State Center Ticket Office or any Ticketmaster.