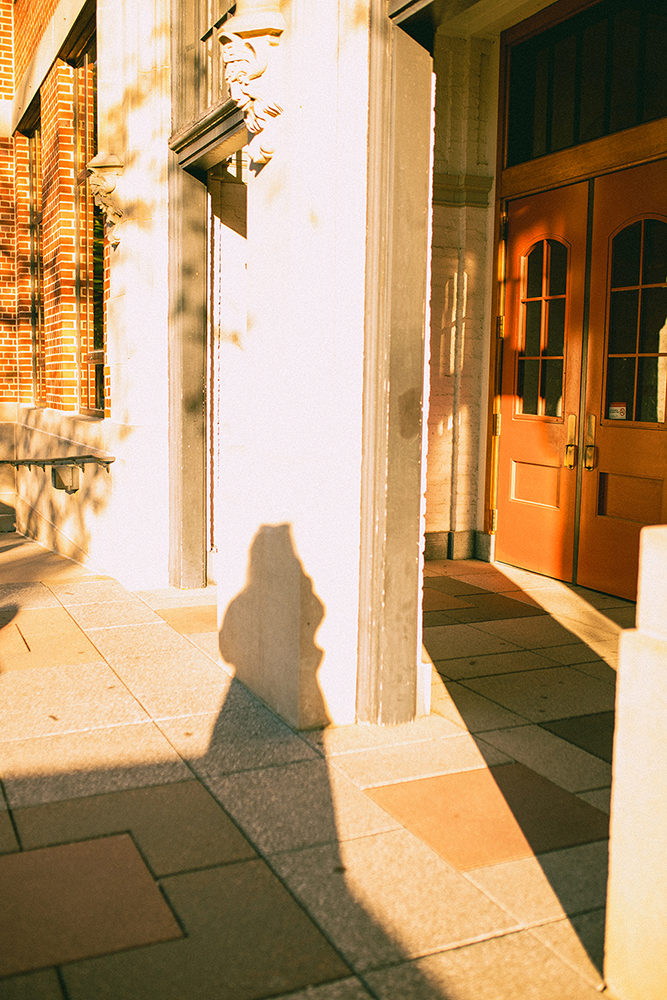 Most recent college graduates are laser focused on the future as they launch careers, move to new cities and turn the page to a fresh chapter. But Regine Peters (’20 statistics) is happy to sit in the past for a while—as she recalls how the LAS Success Grant program changed the trajectory of her undergraduate journey at Iowa State.

“It’s impossible not to think about the past, because I may not have a degree in statistics or my current job if I hadn’t learned about the Success Grant program,” Peters said. “Without the donors who make this program work, it would have been a very rough ride for me.”

“The program was so much more than someone saying ‘Here’s a check,’” Peters said. “They took an interest in me beyond my circumstances and created a genuine connection that continues today.”

That “genuine connection” inspired Peters to accept a job at Iowa State where she serves and empowers Iowa State students. Recently hired as a program assistant in the Graduate College, Peters helps underserved students secure funding to present at conferences, land research opportunities and carve out successful paths toward dream careers and top-pick graduate programs.

Peters’ career is the ultimate pay-it-forward tribute to the Success Grant program.

“I was so moved by how I was helped as a student at Iowa State, and it just seemed fitting to build a career around helping Iowa State students,” Peters said. “When you understand what a difference that helps makes, you want to do the same for others.”

Established in 2017 with a gift from the Sulentic Family Foundation, the LAS Success Grant program began when Bob and Susan Sulentic stepped forward with a sizable donation. The funds were earmarked for LAS students facing financial emergencies. Since then, a steady flow of donations—both large and small—has sustained the program’s growth. Most recently, the Sulentics established an endowment, which will provide a consistent stream of support to students in need of emergency funds.

“The success of this program reflects our caring Iowa State community and the generosity of our alumni,” said Kent Kerby, assistant dean for student success and adjunct professor of genetics, development and cell biology, who, along with Mary Ullestad-Heneke, serves as an LAS Success Grant program administrator.

Kerby added, “I’ll never forget the students who have been so grateful to receive help from people who have never met them. Every contribution, from the Sulentic endowment, to the $10 and $25 gifts from alumni all over the globe, is critical toward helping our students succeed.”

“The total amount awarded has nearly doubled every year, as donor gifts and student needs have grown,” Ullestad Heneke said. “You just cannot overstate the impact that these donations have made on hardworking students who are enduring overwhelming challenges.”

The university registrar places a temporary hold on student accounts that have outstanding university balances. This leaves students unable to register for classes. These holds are lifted only after the remaining balances are paid.

This is where an LAS Success Grant can make a difference.

While interning for NASA, Searles learned about the National Oceanic and Atmospheric Administration’s Commissioned Officer Corps (NOAA Corp) program, which employs more than 320 officers who conduct environmental, atmospheric and oceanographic research aboard ships that sail throughout the world.

The dream of working for NOAA Corp stopped Searles in his academic tracks, just as he was rounding the final lap of his Iowa State education.

“I knew that job was what I wanted more than anything. But it required a STEM degree—and I was a journalism major,” Searles said. “So I changed my major to geology, which meant two more years in college, instead of one.”

Searles got to work. He cobbled together money from student loans, an on-campus research job and his community advisor role at Frederiksen Court Apartments. Things were going well until unexpected expenses left him unable to pay for tuition. Searles began cutting his budget, which was organized on meticulous spreadsheets. But counting pennies wasn’t enough. During a two-week period, which Searles describes as “a low point,” he subsisted on one CLIF Bar a day.

After seriously considering dropping out, he sought help and was referred to the LAS Success Grant program.

Ullestad-Heneke describes Searles’ story as heartbreaking, but typical. “Often the students who apply for Success Grants are working multiple jobs and are within one year of graduation,” she said.

“Many have borrowed money to fund their education, and we don’t want to see students drop out due to unpaid tuition. How tragic would that be?” Ullestad-Heneke said. “It’s amazing what a few hundred dollars can do for them.”

After receiving a $1,000 LAS Success Grant, Searles’ tuition bill was paid, which freed up money for food and basic living expenses. Suddenly, his spreadsheets didn’t look so bleak.

A few months before graduation, Searles’ dream job became a reality. An official with NOAA Corps called with a job offer.

“When I found out I was hired as a commissioned officer, I felt the same gratitude and elation that I did when I was awarded the Success Grant,” Searles said. “I am where I am now, financially secure and driving a ship on the ocean because of $1,000.”

Jurnie Hinde (’21 biochemistry) credits the LAS Success Grant program with guiding her toward a research career and sparking her interest in human-subject research.

“Because of $1,000, I quit two part-time jobs and took a chance on an undergraduate research job, and I discovered that I really enjoyed working with people in a lab setting,” Hinde said. “Not only was I helped out of a tight financial spot, I was able to fully live my college experience and grow as a person in ways that guided me into my current career.”

Hinde conducts breast cancer research, on an all-female research team for the University of Texas MD Anderson Cancer Center in Houston. Her work benefits women from underserved and vulnerable populations.

“I’d describe my work as very rewarding,” Hinde said. “I’m full of unbelievable gratitude for my Iowa State experiences that led me here.”

Moving forward
As the LAS Success Grant program moves into its fourth year, Kerby and Ullestad- Heneke are improving and streamlining processes to accommodate the growing number of applicants.

“The need is tremendous right now and the pandemic has added new challenges that are not going away,” Ullestad-Heneke said. “Many students are going forward with less support and it’s crucial to help them without the hassle of red tape.”

“I am still shocked to this day how quick and easy the process was. My tuition was paid within a day or two and I felt like I had won an instant lottery,” Searles said. “You carry that weight for so long, you forget how heavy it is until it is lifted.”

Whether they’re traversing the Atlantic Ocean, conducting cancer research or helping Iowa State students pursue their own dreams—the recipients of LAS Success Grants look back with gratitude for the program as they move forward as Cyclone alumni.

If you would like additional details about the LAS Success Grant Program or information about how to donate, please feel free to visit this link: www.foundation.iastate.edu/lassuccess