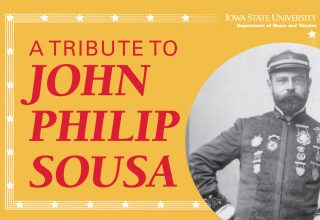 A few years ago, Michael Golemo, University Professor and director of bands at Iowa State, was flipping through a book listing the 15,000-plus performances of the John Philip Sousa Band when something caught his eye—a Nov. 11, 1920, concert performed in Ames, Iowa, at State Gym.

According to a review the next day by The Ames Daily Tribune, “over 4,000 people” packed into State Gym to hear the famed Sousa Band perform an Armistice Day program that was “eclectic and satisfying to all lovers of music.”

The ISU Wind Ensemble plans to honor that historic event and recreate its patriotic pride during a 101st anniversary concert and tribute to Sousa on Veterans Day, Nov. 11, at 7:00 p.m. in State Gym. Originally planned for the 100th anniversary, the concert was postponed due to the COVID-19 pandemic.

“We thought it would be neat to do a 100th anniversary concert,” Golemo said. “It was his only concert in Ames, so that’s significant. It will be a patriotic concert in the Sousa style. We’re going to have a narrator there to put you back in that timeframe.”

Sousa, known as “The March King,” is best remembered for his marches, but what people don’t often know, Golemo said, is that he brought classical music to small towns and places around the world. In a time before radios, records and phonographs became common household items, the Sousa Band crisscrossed the globe introducing audiences to the sounds of Wagner, Rossini and Verdi.

Golemo said Sousa fell in love with touring as conductor of the “The President’s Own” United States Marine Band. After 12 years in the role under five presidents, Sousa organized his own civilian band and went on tour.

“He played in Africa, Europe, Asia and Australia,” Golemo said. “He was playing classical overtures and music that hadn’t even been performed by the Metropolitan Opera in New York and he’s playing it in small towns in Kansas and in Iowa. He was known for bringing quality music all around.”

A prolific composer and arranger, Sousa expanded the available repertoire for concert bands, which were still in their infancy at the turn of the 20th century, Golemo said. Sousa commissioned transcriptions of orchestra music and wrote original compositions for band, piano and vocal music.

“Sousa was an authentic cultural hero,” Golemo said. “He personified turn-of-the-century America. His music was a reflection of the pride and patriotism that people felt as the United States was becoming a world power.”

The ISU Wind Ensemble’s program will be modeled after a traditional Sousa concert, with marches as encores and a featured soloist. Musical selections will include “The Light Calvary Overture” by Franz von Suppé; “O mio babbino caro,” by Giacomo Puccini, with euphonium soloist Lance LaDuke; and “The Stars and Stripes Forever” by John Philip Sousa.

LaDuke is an internationally known educator, performer and creator who has played in over 25 countries and all 50 states. A faculty member at Carnegie Mellon University, he is a previous member of the U.S. Air Force Band in Washington, D.C., among other prestigious bands.

“He is a virtuoso who will do some things that will just be smoking,” Golemo said. “He’s really an incredible musician.”

Veterans and members of the Armed Forces also will be recognized, Navy and Marine ROTC units will present the colors and John Burnett-Larkins, announcer for the Iowa State University Cyclone Football “Varsity” Marching Band, will serve as emcee. A spectacular finale featuring surprise special guests is planned, and Golemo hopes all the pageantry will convey just how special the Sousa Band’s Ames performance must have been a century ago.

“When the Sousa Band came to town, the schools shut down, the businesses shut down,” he said. “This was a once-in-a-lifetime opportunity to hear real classical music. It was extremely special, and we’re trying to give the historical perspective of what this was about.”

Golemo, a self-described “Sousa-holic,” also has planned a tribute that will last long after the final notes from the anniversary concert fade away. A historic plaque, sponsored by the John Philip Sousa Band Foundation, will be unveiled to honor the site of the band’s 1920 State Gym performance.

“This will be really special,” Golemo said. “It will be a big splash.”

Tickets are $15 and can be purchased at the main office in Simon Estes Music Hall. For more information, visit the Iowa State University Department of Music and Theatre website at music.iastate.edu.