ISU Theatre’s “Corners Grove,” opening Thursday, Oct. 14 in Fisher Theater, follows a group of young people as they come of age and navigate love, loss and identity in their town of Corners Grove. And if something about the play’s title sounds a little familiar, there’s a good reason why.

Written by playwright Kaela Mei-Shing Garvin, “Corners Grove” is a thoughtful nod to “Our Town,” Thornton Wilder’s classic American drama about the early 20th century residents of small-town Grover’s Corner. Garvin’s modern take, set more than 100 years later, follows a diverse cast of young people from high school into adulthood as they deal with their own set of challenges—leaving home, falling in love, gender identity and the death of Whitney Houston.

Described as a story of “growing up and hometowns, friendship and drinking in parking lots,” the ISU Theatre cast hopes the show’s universal themes of love, loss, nostalgia and conflict resonate with audience members of any age.

“We are all college students who have been through at least one thing in this play,” said Morgan Wolfe, junior public relations major, who plays the role of Julia Gibbs. “Having to separate from your high school friends, someone in your life dealing with drug abuse and losing someone you are close to aren’t uncommon events. It’s a relatable story that I think our cast puts on very well.”

“Corners Grove” is ISU Theatre’s first performance for a live Fisher Theater audience since the start of the COVID-19 pandemic. Sharing stories about the ups and downs of early adulthood—stories that can be heartfelt, heartbreaking and hilarious—and finding your family along the way, has been fulfilling for the cast. 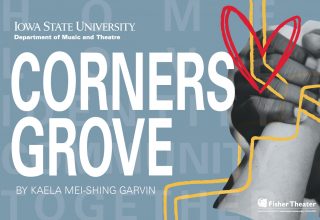 “Corners Grove gave us all a little of what we needed right now,” said Tiffany Johnson, assistant professor of practice in the Department of Music and Theatre and the show’s director. “It’s reminded us of how supported you feel, how confident you can be when you have your community to hold your back straight. It’s reminded us that life happens, the good times and the bad times. These things begin to draw contrasts for each other, and because we know them both, we can understand the fullness of each better. We know how to love better because we have experienced hate, and we can know happiness better because we have experienced sadness. It’s been an honor and pleasure to direct this cast of brilliant artists and even better human beings.”

Wolfe said the most inspiring lesson she has gained from the show is to embrace her present experiences.

“Growing up, everything will change,” she said. “It’s important to cherish the people you’re surrounded by and experiences you hold before they become only memories. Always be kind and know that you aren’t alone in even the hardest years.”

Showtimes are Oct. 14, 15 and 16 at 7:30 p.m. and Oct. 17 at 2:00 p.m. Admission is $20 for adults and free for Iowa State students and youth. For ticket information, visit theatre.iastate.edu. This show contains adult content and language.

For more information about ISU Theatre, visit www.theatre.iastate.edu, email isutheatre@iastate.edu or call 515-294-2624. ISU Theatre is funded by ISU Student Government and supported by the Transforming Liberal Arts and Sciences Endowment.