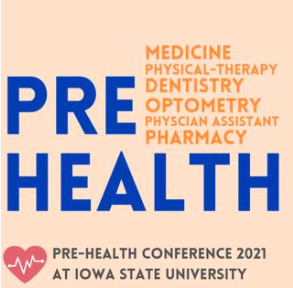 After watching a filmed University of California-Davis pre-medical conference, she said she had a “crazy idea.” What if she could create a similar event at Iowa State for pre-health students to connect, network and find encouragement?

In less than a month, her idea will be a reality.

Student registration opens today, Jan. 25, for the first Pre-Health Conference at Iowa State. The conference, held virtually from 9 a.m. to 4 p.m. on Feb. 20, will connect students with more than 75 medical, pharmacy, physician’s assistant, dental, optometry, podiatry, physical therapy and other professional school programs from around the country.

The full day of panels features opportunities such as health professionals discussing their personal career paths, live interactive Q & A sessions with current graduate students and even a virtual Achilles tendon repair.

Students will also get to hear directly from admissions representatives during an “Anatomy of an Applicant” panel and join breakout sessions with their favorite programs.

Planning during a pandemic

Along with the enormous task of planning their first conference, Vannoy and her fellow team members faced the added challenge of adapting their plans during a public health emergency.

Vannoy got the the ball rolling in 2019 with support from LAS assistant dean Kent Kerby and recruited a team that grew to as many as 17 students. The original conference planned for spring 2020 was canceled, and now an 11-member executive team has spent the past year revamping for a virtual conference. They expect as many as 300 to 400 Iowa State undergraduates to attend.

“The pandemic really sent us spinning,” she said. “We had to completely replan and reorganize for another whole year of planning and a new format. A virtual conference may seem easier, but there is much more organization needed.”

Fortunately, there was also an upside to going virtual: increased participation from schools beyond the Midwest.

“Schools that would never be able to come in person, such as the University of California, are able to ‘visit’ Iowa State,” she said. “We have seen many schools that said no to an in-person conference because of cost now say yes to our virtual format.”

Kerby said he is amazed by the tremendous teamwork of Vannoy and her fellow student leaders.

“Effective health care comes through maximizing the collective intelligence of the healthcare teams, and these individuals have come to appreciate the skills and strengths of one another,” he said. “I have never seen students take on a project of this magnitude and have learned a great deal about who they are as individuals and the kind of healthcare providers they will be. It makes me incredibly optimistic about the future of healthcare.”

Vannoy hopes the conference will fill the void many pre-health students felt this past year, as shadowing and mentoring opportunities became more elusive during the COVID-19 pandemic.

“I am excited to see Iowa State students network with healthcare professionals,” she said. “I hope students get inspired by attending. They will get to talk with professionals, graduate students in their desired field and the schools they might one day attend. It has been a rough year, and I want them to remember that their goals are real and achievable, even when it feels so far away.”

For Vannoy, it’s also been a lesson that persistence, even during a pandemic, pays off.

“Your ideas matter,” she said. “If you have a really good idea, but it sounds out of reach, don’t give up. This conference was my crazy idea. Now it is reality. Your crazy ideas can make positive change on campus.”