ISU Theatre presents “Our Community Carol: A Blueprint for a Play” 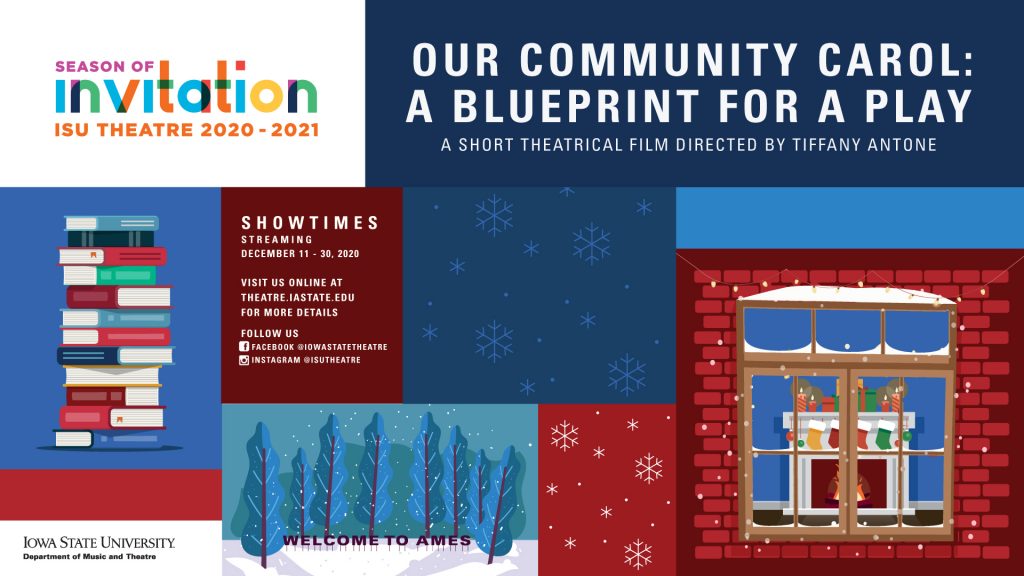 It’s been a tough year for traditions, but a good one for innovation. ISU Theatre is deftly managing to bring audiences both, with an inventive short film based on a Charles Dickens’ holiday classic. “Our Community Carol: A Blueprint for a Play,” streaming Dec. 11-30, is filled with holiday magic and heartwarming reflections on the Ames community.

Tiffany Antone, assistant teaching professor of theatre and project facilitator, came up with the idea for the show last spring. She envisioned it as a stage adaptation with audience interaction. But with live theatre on pause during the COVID-19 pandemic, ISU Theatre had to trade “curtain up” for “lights, camera, action.”

“We started the semester with a lot of hope and wild ideas and began to get ready for the experiment of making a movie,” Antone said. “It’s been an exercise in incredible amounts of innovation and collaboration in a very compressed time period.”

Iowa State students and faculty penned the script, which tells the story of three bored theatre ghosts who imagine a modern-day, Ames-based version of Dickens’ “A Christmas Carol.” With a little ghostly interference, they help a student named Tiny and other Ames residents come together as a community.

More than 50 students, faculty and staff helped produce the 60-minute film in only 14 weeks. George Poll, a freshman in performing arts, was a member of the nine-person screenwriting team and also plays the role of Tiny’s sister.

“We did the Round Robin style where you write and then edit another scene,” Poll said. “It was cool to see how different people brought different ideas to the table.”

Producing a short film during a pandemic has been an intricate process. How do you limit the number of actors on stage per scene? How do you design props, normally seen at a distance from stage, with enough detail for a close-up shot? And, how do you create enough sets for an entire film? The creative solution to the last question involved a green screen backdrop and sets that were drawn on paper, digitized and then inserted in post-production with animated special effects.

“Everyone has risen to the challenge,” Antone said. “I am incredibly proud of everyone who worked on this. I hope when it is cut together that people can see all the love that has gone into it. We thought a lot about our audience as we labored on this project, and we imagined this film landing in their homes like a warm, crackling, digital fire.”

“Our Community Carol” also incorporates citizen artistry through community engagement. The script includes references to the Boys and Girls Club of Story County, the Ames Public Library, the Food Bank of Iowa and others, in hopes that audiences may be inspired to give or receive help as needed this year.

“I hope people at the end can reflect on what they are thankful for this holiday season,” Antone said. “It’s a season of challenge. We may have to make tough decisions about spending time with our loved ones this year and that makes it harder to celebrate and feel the joy. I hope people can embrace the possibilities around them and find ways to connect in the places where they are. I also hope you laugh and have a good time.”

Details on how to access the Dec. 11-30 stream will be posted soon on the show’s production page. Admission is “pay what you will.”