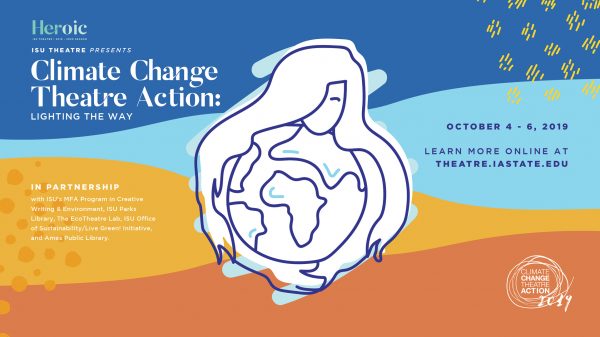 What will a trip to the zoo look like a century from now? That’s one of the provocative questions ISU Theatre will explore when it presents “Climate Change Theatre Action: Lighting the Way,” opening Friday, Oct. 4 at 7:30 p.m.  The production performs Oct. 4 – 6 at Fisher Theater, Oct. 10 outside of ISU Parks Library and Oct. 13 at Ames Public Library. All performances are free admission with general seating.

Founded in 2015, the international Climate Change Theatre Action initiative is a worldwide series of readings and performances of short climate change plays. The series is presented biennially to coincide with meetings of the United Nations Climate Change Conference, held this year in Santiago, Chile.

Fifty international playwrights, representing all continents and several cultures and Indigenous nations, are commissioned to write short plays about various aspects of climate change. Collaborators then select plays to present at local productions.

ISU Theatre’s ensemble cast will tell stories of action, community and hope through 18 imaginative performance pieces by international and local writers. One play is narrated by the last surviving bee in Manhattan. Another play invites the audience into an interactive Rube Goldberg style experiment.

Alumna guest director Vivian M. Cook said the performance event will encourage audience members to reflect on the connections between the environment and humanity, while providing opportunities for them to join climate efforts in their own communities.

“The goal of the international project is to tell the story of climate change and how it connects to humans across the world who come from different places, backgrounds, and perspectives,” Cook said. “These are stories that are for all of us, that are about all of us, and that are crucial to share today.”

Cook, a graduate student in Iowa State’s Sustainable Agriculture and Community Regional Planning Programs, also led Climate Change Theatre Action at Iowa State in 2017, as part of her Honors project while she was a performing arts undergraduate.

Community members can learn how to take local action on climate through a Sustainability Resource Fair during intermission and after each performance, as well as during the panel discussion, “Leading the Way: Women Tell the Stories of Climate Change” on Oct. 6.

The panel discussion, “Leading the Way: Women Tell the Stories of Climate Change,” will be held Sunday, Oct. 6 at 3:30 p.m. in the Scheman Building, Room 004. Community members are invited to engage with scholars and guest artists on climate change and sustainability issues. The discussion is part of ISU Theatre’s yearlong symposium series, “HERoic: Gender Equity in the Arts,” which includes lectures by two 2019 Tony Award recipients. The event is also co-sponsored by ISU’s MFA program in Creative Writing & Environment and the Center for Excellence in the Arts and Humanities.

As a part of the Iowa State University Department of Music and Theatre, ISU Theatre seeks to empower citizen artistry by engaging students and the community in transformative theatre and performing arts experiences which examine the human condition, encourage lifelong learning, teach artistic skills, prepare professionals, inspire empathy, explore creativity, build relationships, and embrace diversity. ISU Theatre administers a major and minor in performing arts and produces multiple theatre and performing arts productions throughout the year featuring performers, designers, and technicians from throughout the university.