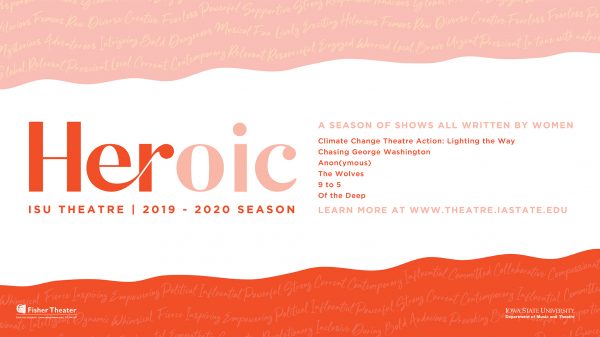 For its 2019-20 season, ISU Theatre will produce six shows written by women, bring two 2019 Tony Award winners to Iowa State, host a yearlong symposium series, celebrate the 100th anniversary of women’s suffrage and commit to a national “50/50 by 2020” initiative promoting gender equity in theatre. It’s what you might call a “HERoic” undertaking.

According to the Dramatists Guild of America’s 2016-17 season count, only 29% of plays produced in America are written by women. The percentage drops to 24% for plays produced in the Great Plains region, which includes Iowa.

ISU Theatre will address the gender gap with its upcoming “HERoic” season, featuring plays and musicals written by women. Brad Dell, associate professor and director of ISU Theatre, said he is not aware of another theatre program currently producing an entire season of women playwrights.

“It’s time for a change,” Dell said. “We are eager to commit to gender parity and a more inclusive canon in future seasons. Our season will celebrate the importance of women’s voices in the arts, humanities and sciences, and encourage others to commit to equal and equitable space at every table for women now and into the future.”

ISU Theatre’s season includes a community-focused series of climate change plays, a fun-filled family musical about George Washington, a poetic and contemporary retelling of Homer’s “The Odyssey” through an immigrant perspective, the spirited story of a high school girls soccer team, Dolly Parton’s high-octane musical “9 to 5” and a puppetry drama that ponders the enormity of the connection between humans and the natural world.

“There is a magic that happens when you bring more diverse voices to the table,” Dell said. “This is a season of big questions, soulful storytelling, hilarious comedy and powerful possibilities.”

To accompany its season of shows, ISU Theatre has planned a yearlong symposium series titled “HERoic: Gender Equity in the Arts” that includes lectures by two 2019 Tony Award winners.

Rachel Hauck, winner of the 2019 Tony Award for Best Scenic Design of a Musical for “Hadestown,” will present “Knowing How to Break the Rules: Set Design on Broadway” on Oct. 6 at 7:00 p.m. in the Great Hall of Iowa State’s Memorial Union.

Ali Stroker, the first actress in a wheelchair to earn a Tony Award, won the 2019 award for Best Supporting Actress in a Musical for “Oklahoma.” Stroker will present “Turning Limitations into Opportunities” on April 6, 2020, at 7:00 p.m. in the Memorial Union Great Hall. This program is co-sponsored by ISU’s Committee on Lectures (funded by Student Government).

The symposium series will also include roundtable community conversations after the Sunday matinee performances of each ISU Theatre season production. These conversations will feature local experts and guest artists who will lead discussions relating to the productions, gender equity, representation and diversity.

“We are excited to invite audiences to participate in this conversation and provide students opportunities to engage with local, regional and national artists and scholars,” Dell said.

New York based director Arpita Mukherjee will be one of the College of Liberal Arts and Sciences Dean’s Artists in Residence, a program funded by the Transforming Liberal Arts and Sciences Endowment. A Eugene O’Neill Directing Fellow and member of the Lincoln Center Director’s Lab, Mukherjee will direct offer a series of guest artist masterclasses and direct ISU Theatre’s production of “Anon(ymous)” by Naomi Iizuka.

A new generation of citizen artists

Dell hopes this monumental year of programming is just the start. ISU Theatre is already looking toward its 2020-21 season with plans to participate in the national theatre community’s “Year of Jubilee,” a celebration that envisions every American theatre producing works by women, people of color, artists of varied physical and cognitive ability and LGBTQIA-identified artists.

“Our vision for ISU Theatre is to train the next generation of citizen artists and inspire citizen artistry throughout the community,” Dell said. “The production season represents our most public and visible testament to that. We would love to put Iowa State on the map as a regional and national leader in citizen artistry.”

ISU Theatre’s “HERoic” season is supported by the Government of Student Body, the Transforming Liberal Arts and Sciences Endowment and a grant award of $1,635 from Humanities Iowa, a state-based affiliate of the National Endowment for the Humanities.

All performances will be held in Fisher Theater. Season tickets and single show tickets are available through the Iowa State Center Ticket Office, all Ticketmaster locations or the Fisher Theater box office prior to performances.

“Chasing George Washington: A White House Adventure”
A Musical Adventure for the Whole Family
A White House field trip turns into a magical adventure with our most famous founding father, who helps students discover the true portrait of America.
Oct. 25 – Nov. 2, 2019

“Anon(ymous)”
A Reimagination of an Ancient Classic
A young refugee travels the U.S. on an epic search for his family in an entrancing and imaginative adaptation of Homer’s “The Odyssey.”
Dec. 6 – 14, 2019

“The Wolves”
A Sizzling Contemporary Drama
From the safety of their warm-up circle, an all-girls soccer team navigates the big questions and wages tiny battles with all the vim and vigor of a pack of adolescent warriors. Mature content.
Feb. 28 – March 7, 2020

“9 to 5”
A Musical Comedy
Based on the hit 1980 film, “9 to 5” delivers musical comedy and feminist flair when a trio of overworked office workers kidnap their sexist, egotistical, lying, hypocritical bigot of a boss. Mature content.
April 3 – 11, 2020

“Of the Deep”
A New Play Featuring Puppetry and Original Music
When residents of a small coastal village discover a massive whale carcass on their shore, they must confront practical and existential challenges.
April 24 – May 2, 2020

As a part of the Iowa State University Department of Music and Theatre, ISU Theatre seeks to empower citizen artistry by engaging students and the community in transformative theatre and performing arts experiences which examine the human condition, encourage lifelong learning, teach artistic skills, prepare professionals, inspire empathy, explore creativity, build relationships, and embrace diversity. ISU Theatre administers a major and minor in performing arts and produces multiple theatre and performing arts productions throughout the year featuring performers, designers, and technicians from throughout the university.