Established in 1961, the Distinguished Alumni Award is the highest honor given to alumni by Iowa State University through the ISU Alumni Association. The award honors ISU alumni who are nationally and/or internationally recognized for preeminent contributions to their professions or life’s work. 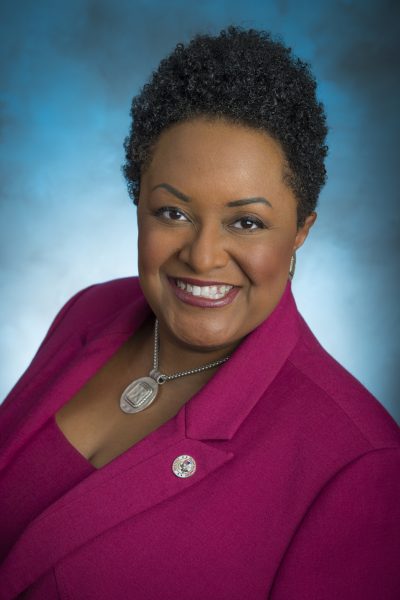 DeRionne Pollard is a visionary national leader in higher education who is committed to academic opportunity for all. President of the three-campus Montgomery College in Maryland since 2010, Pollard was one of seven college presidents nationally to be honored in 2017 with the Carnegie Corporation’s Academic Leadership Award for educators.

The award is presented to leaders who demonstrate outstanding creativity, commitment to excellence and equal opportunity, international engagement and strong ties to the local community. Under Pollard’s leadership, Montgomery College has increased its graduation and transfer rates; a 1,700-member coaching program has been created to provide disadvantaged high school students with a pathway to a college degree; and grant-funded research at the community college system has tripled.

In addition to two degrees from Iowa State, Pollard earned a Ph.D. in educational leadership and policy studies from Loyola University in her hometown of Chicago, Illinois. She is a proud member of Zeta Phi Beta Sorority, Inc., in which she remains active in the Gamma Alpha Eta Zeta Chapter in Montgomery County, MD, and is also an active member of the Silver Spring, Maryland chapter of The Links, Inc.

Pollard and her spouse, Robyn A. Jones (’93 housing and the near environment, MS ’95) are the parents of Myles Julian Pollard-Jones. They are ISU Alumni Association life members.

A chemist by training, Dr. Rich has 26 United States Patents and spent his formative years as a scientist and manager at General Electric. He subsequently joined Goodyear Tire and Rubber company, first as President of the chemical division and later as President of Goodyear’s North American tire division.

Dr. Rich retired in February 2018 as chairman and CEO of Berry Global Inc., a Fortune 500 global manufacturer of plastic packaging for food, pharmaceutical, healthcare and industrial applications. Under his leadership, the company earned net sales of $6.5 billion in 2016 and became a public company in 2012 with shares traded on the New York Stock Exchange.

His expertise led him to the halls of Congress where he testified before the United States House Committee on Research and Technology and advocated for a national strategic manufacturing plan and increases in public research funding.

He currently serves on the board of directors for PLZ Aeroscience, a portfolio company of Pritzker Private Capital and is an advisor to Apollo Global Management in New York City.  Since 2017 Dr. Rich has been a visiting lecturer at the Johnson/Dyson School of Business at Cornell University.

“The foundation of my business career was the outstanding education that I received at Iowa State University,” said Rich. “I am very grateful to the Alumni Association and the administration at Iowa State for this tremendous honor.”

The Distinguished Alumni Awards will be presented to Dr. Pollard and Dr. Rich at the Distinguished Awards Celebration in the Benton Auditorium in the Scheman Building on the Iowa State University campus. The ceremony will be held on Friday, April 26, at 2:00 p.m. The event is open to the public.